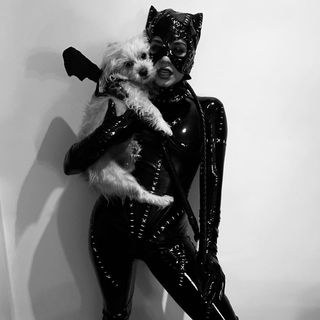 The pandemic might have cancelled big Halloween events and parties, but that did not stop celebrities from dressing up and getting into the Halloween spirit.

From spooky, extravagant, clever to humorous costumes, these are the list of Best Celebrity Halloween Costumes so far:

Lil Nas X: The “Old Town Road” singer dressed up as Nicki Minaj on her iconic debut album Pink Friday. He wore a skin-tight pink bodysuit, with prosthetic breasts to complete the look.

Drew Barrymore: Drew Baryymore showed up as Glinda the Good Witch from the “Wizard of Oz” on her talk show “The Drew Barrymore Show”

Loren Gray: Social media influencer and singer dressed in an extravagant “queen of hearts” costume. She also dressed up as Barbie from “Fairytopia” in a rainbow coloured costume with matching wings.

Kim Kardashian west and children North, Saint, Chicago, and Psalms got their Halloween inspiration from the infamous docuseries “Tiger King”. Kim, dressed as Carole Baskins and her best friend Jonathan Cheban dressed as Joe exotic, while her children dress as adorable little cubs.

Saweetie: The “ICY GIRL” singer dressed up as one of the most iconic American girl group Destiny’s Child, which consist of Beyonce, Michelle Williams, and Kelly Rowland. She dressed as all the members from the group.

Halsey: The singer dressed up as the corpse bride from the iconic Halloween movie “Corpse Bride” by Tim Burton

Mindy Kaling dressed up as Devi Vishwakumar from “Never Have I Ever”.

Vanessa Hudgens: The Highschool Musical actress, dressed up as cat woman and black widow and several other characters for this year’s Halloween.

Bretman Rock and his nephew had an adorable Halloween costume. Bretman rock dressed as Edna Monde and his nephew as JackJack from the movie “Incredibles”.

Kylie Jenner: The beauty mogul is known for over the top Halloween costumes. This year she and her squad decided to dress up as Power Rangers

Heidi Klum: Dubbed as the queen of Halloween costumes by the media for over the top and out of the world Halloween costumes. In 2018 she dressed in a full customer as Fiona. In 2019, she dressed up as a bionic zombie alien, which shocked and impressed everyone. This year’s Halloween, Heidi decides to disguise herself with body paint to blend in her surroundings.

On the first costume she disguised herself to blend into a wood paneled wall, complete with a board and sticky notes. On the second one, her whole body was spray painted to blend in with the marble bedsheet.